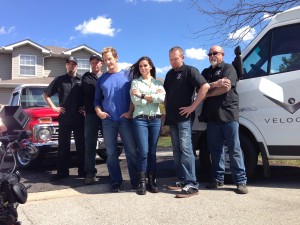 Ready to get Rescued? From DIY to Done.

From The Hollywood Reporter, Discovery Communications-owned network Velocity is revving up for the return of Dream Car Week.

The cable channel has set the weeklong lineup — which focuses on the most unique, beautiful and exotic vehicles coupled with the top experts in the automotive genre — for Sunday, July 27, through Saturday, Aug. 2, and will air 14 hours of new programming this time around.

Each night will be themed by series and hosted by automotive authorities. The week kicks off with the season-two premiere ofFantomworks and also will include new episodes ofChasing Classic Cars, Overhaulin’, Wheeler Dealers and Graveyard Carzalong with the series premiere of Garage Squad.

Robert Scanlon, general manager of Velocity, noted that Dream Car Week launched last year as a block of programming that generated a lot of interest among viewers despite little promotion.

“This year we’re supersizing it, premiering 14 hours of programming and having hosts or experts from our series host an entire night,” he said. “What distinguishes us from other [networks] is that we have these individual men and women who are recognized experts for their knowledge about cars — in building, designing, restoring, locating, valuing — as opposed to good-looking talking heads.”

GARAGE SQUAD / TECH TOYS NIGHT
Series World Premiere Double Episode Event, Friday, August 1 at 9 and 10 p.m.
Night hosted by Lauren Bohlander and Bruno Massel of Garage Squad
At 9 p.m., hosts Lauren Bohlander and Bruno Massel help people nationwide finish that “project car” that’s been sitting in the garage collecting dust just waiting for a little love in the all-new series Garage Squad. Bruno and Lauren surprise people who have been working on their dream autos with the opportunity to get expert help to finally finish the project – taking those cars from DIY to done. At 10 p.m. Velocity’s Tech Toys invites viewers to experience supercars — a Ford Galpin GT, Hennessey Venom GT, Corvette Stingray and Dodge SRT Viper — throughout the design and manufacturing process. From boutique designers to legendary brands, this Tech Toys special travels the globe, breaking down the best in automotive.

“Our model is definitely unique.  If you compare us to other creative shops or small agencies, no one in that space is developing and producing true entertainment programming like we are.  And if you look at traditional entertainment prodcos, they don’t have our integrated marketing DNA. And they’re certainly not doing it out of Chicago.” Bill Connell, co-founder/managing partner at super genius inc.